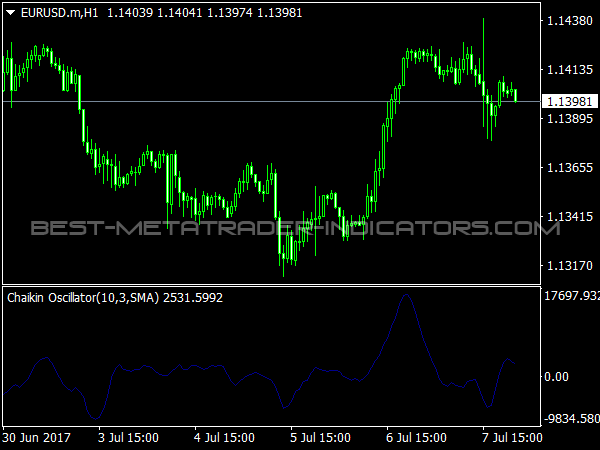 An attempt to improve the accumulation/distribution indicator: a kind of momentum of the accumulation/distribution indicator. With this, he tries to capture the rotation in liquidity, the center line is the signal, according to Chaikin, one should use it exclusively in the direction of the trend. He used a 90-day MA for the trend direction, in addition, the extreme values in the indicator indicate counter-movements or trend reversals.

In sideways markets, too many midline crossovers. He is not suitable for exits, since the crossover of the center line is generally late. In trend phases, it gives good signals for mid-line crossovers, at extreme and turning points it is surprisingly fast, so that both exit strategies and contrarian strategies still come in time here. However, it often also has a certain lead time, so that caution is appropriate. Extreme values indicate countermovements that will begin soon.

Chaikin himself emphasized that he can only serve as a supplement to other indicators, he used an oscillator and 21-day envelopes. Furthermore, almost all methods of Part D can be used for improvement, especially zone analysis, trend lines and MAs. It is advisable to use a smaller middle neutral range instead of the center line in order to reduce the false signals in sideways movements. Chaikin himself recommended the use of the oscillator exclusively in the direction of the trend. It is worth doing trend analysis and zone analysis.

Since the safest signal is a divergence to the price after the oscillator has reached its extreme level, especially with bearish divergences, so if the prices make new highs while the oscillator no longer reaches its old highs, a break is almost certainly announced, but the Chaikin oscillator has a lead, so it is not suitable for the concrete timing.