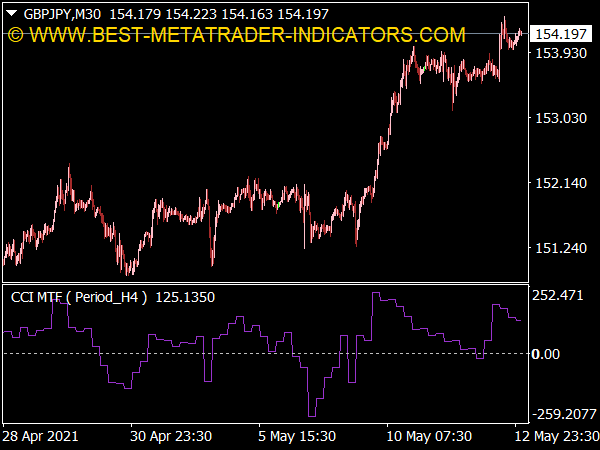 Commodity Channel Index indicator was developed by Donald Lambert and first introduced at the 1980 issue of Technical Analysis of Stocks and Commodities. It is used to identify periods of overbought and oversold at commodities and Forex pairs, through cycle calculation.

Basically, his standard formula calculated the relative difference of price from its Simple Moving Average. Extreme readings such as 100 or (-100) indicate that price is far from its moving average, and it is expected to reverse and retrace back to its mean. This is the basis for the overbought-oversold periods, the way the CCI defines them.

I will now introduce several trading methods of the CCI and explain the logic behind them, in terms of Price action.

A famous trading system that uses the CCI is Woodies CCI. Developed by Ken Woods, this system uses patterns that appear at the CCI indicator to generate trading signals. I will now describe several signals that are profitable and may be used for trading.

Zero-Line-Reject
The Zero-Line-Reject, or ZLR, is a trading pattern that occurs when the CCI comes close to the zero-line (center line) and bounces in the opposite direction. The logic behind this pattern is that price comes close to its moving average and then bounces in the opposite direction – so the moving average serves as support or resistance level.

Make sure that the CCI establishes a trend before a ZLR pattern occurs – the CCI should stay above the zero-line for at least 5 bars before issuing a long ZLR signal. The opposite is true for short trades. The Woodies CCI is a sophisticated systems with several patterns, that include the Ghost, Trend-Line-Break, and more.

cool indicator,
many thanks,
Philip